Home > The Print Ads of Big Brands in Nazi Germany

The Print Ads of Big Brands in Nazi Germany

The Nazi era spanned the years from 1933, when Adolph Hitler came to power, to 1945 when the Third Reich’s forces were defeated at the end of the Second World War. During this time big brands, many of which still exist today, enjoyed financial gain from their involvement with the Nazi regime, and were also active in supporting the Reich and its policies. Naturally, businesses seek profit; in Nazi Germany numerous businesses made their profit margins through slave labour, by facilitating mass murder, and by marketing to both sides in the conflict. Many big brands that today portray themselves as squeaky-clean have a shocking number of skeletons lurking in their closets. 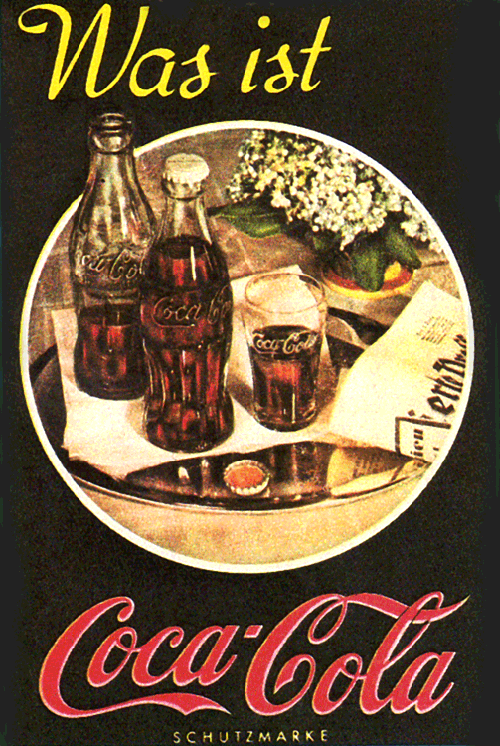 This is cover from a 1938 pamphlet promoting Coca-Cola, a company whose all-American image is tarnished somewhat by its involvement with Nazi Germany. Coca-Cola actively supported the regime by buying advertising space in Nazi publications, and gained lucrative sponsorship deals for the 1936 Berlin Olympics. When war broke out and Germany began invading other countries, Coca-Cola quickly built bottling factories in the occupied territories. The company, like other American-owned corporations, used slaves supplied by the Nazis to improve profits and boost circulation of its tasty drink. 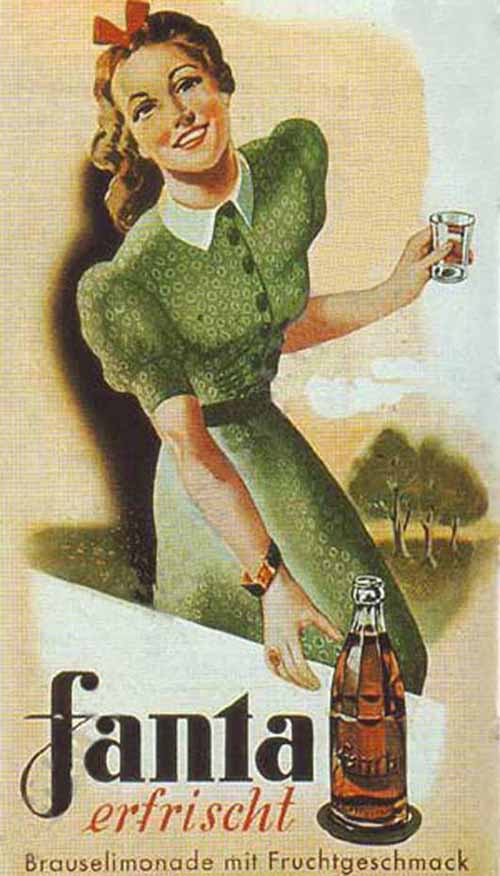 When Hitler declared war on USA, Germany’s vital supply of Coca-Cola syrup quickly dried up. Max Keith, the head Of Coca-Cola’s German operations, used local ingredients to create a new drink called Fanta. The name derives from ‘fantasie’, the German word for ‘imagination’. Keith’s drink was originally flavoured with apple fibres, and by 1943 the Third Reich was drinking millions of bottles of the sweet soda.

The logo of the Bavarian Motor Works (BMW) represents the blades of an aircraft cutting through blue sky, testimony to the company’s origins in aircraft engine production. After the First World War, under the terms of the Versailles Armistice Treaty, BMW was banned from making aircraft engines, so shifted its manufacture to motorcycles and automobiles.
In the 1930s, however, as Germany began rearming, BMW supplied engines for Hitler’s Luftwaffe. The company admits using as many as 30,00 slaves in its factories; slaves supplied from prisoner of war and concentration camps, many of whom would die before the war was over. 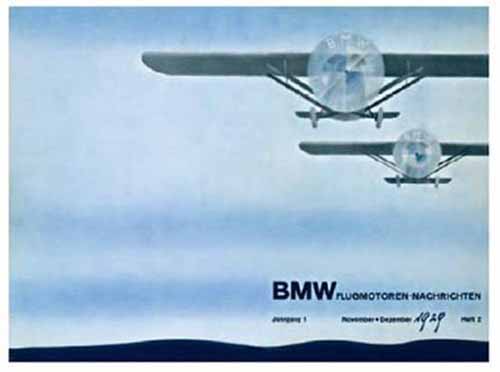 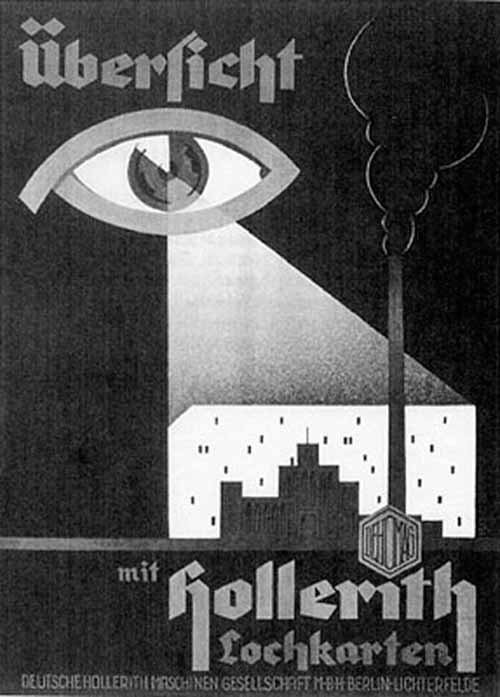 This advert is for IBM’s Hollerith punch cards. Hitler’s Final Solution, the destruction of European Jewry, was mass murder on a grand scale, and understandably a complicated and logistically tricky enterprise. IBM developed a human-marking system using punch cards to help the Nazis track people in conquered territories. Inside the concentration camps IBM’s systems were used to classify people by their religion or ethnicity, their location, and how they were to be executed. The company’s headquarters in New York used its overseas subsidiaries to supply the Third Reich with the punch card technology for a frightfully efficient Holocaust. 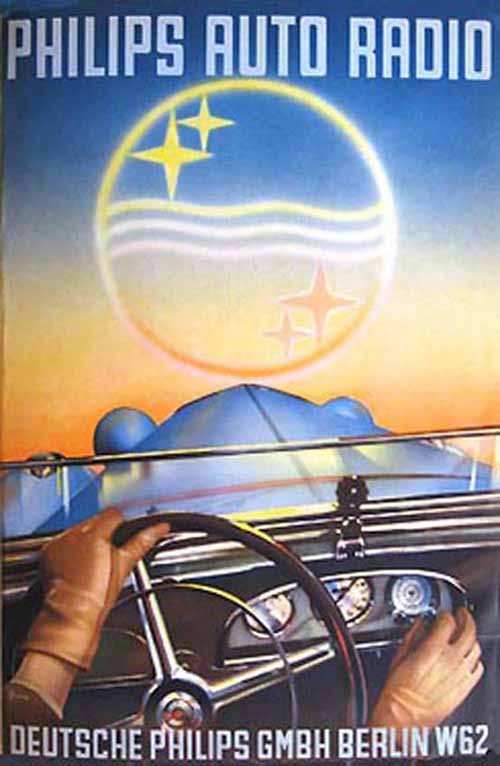 Dutch electronics company Philips provided technology to the German automobile industry, as seen in this advert from the 1930s. Before and during the war, Philips also supplied equipment to German occupational forces.
On 9th May 1940, the company’s directors were tipped off that the Nazis would invade Netherlands the following day, so the directors fled to USA taking a large amount of capital with them. Philips managed to operate throughout the war by relocating, on paper at least, to the Netherlands Antilles. 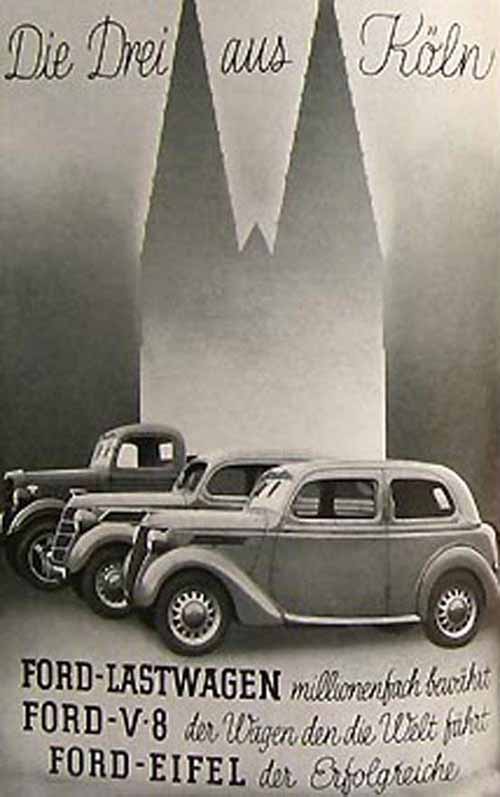 At the outbreak of war in 1939, American automobile companies Ford and General Motors controlled 70 percent of the German car market through their subsidiaries in the country. As the Third Reich sought expansion through invasion, these companies switched their factories to military production, often using slaves to help the Nazi war effort with no-wage labour. 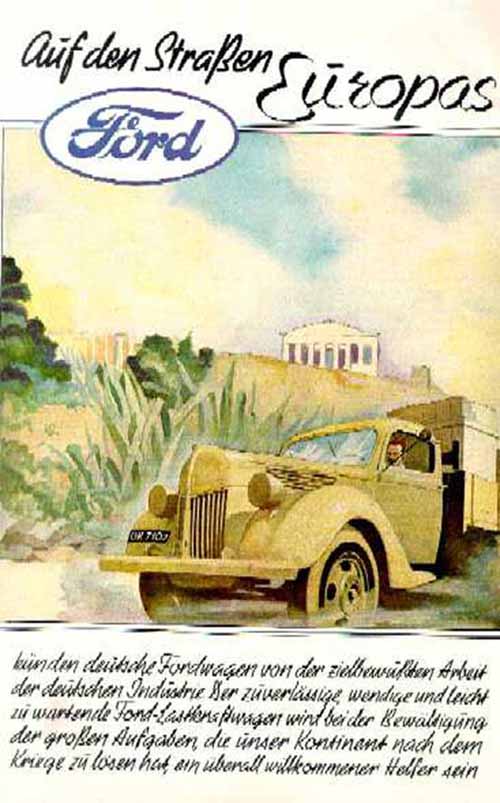 “On the roads of Europe, German Ford trucks testify to the work of German industry”, states this advert from 1944. Later that year the Allies invaded Europe from the west, with US soldiers using trucks, jeeps and tanks made by big American car companies. It came as an unpleasant surprise for these US troops to discover that the Nazi forces they were fighting were also driving Ford trucks and flying warplanes made by Opel, General Motors’ German subsidiary. 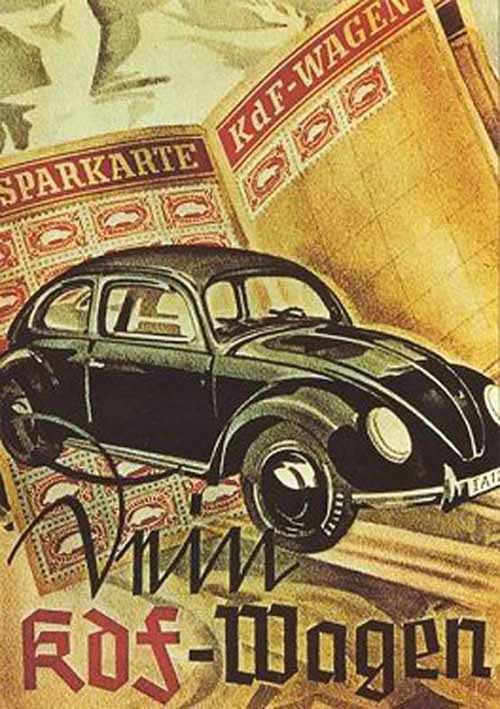 Volkswagen and Porsche enjoyed close relationships with the Third Reich during the Nazi era. Ferdinand Porsche, who Hitler considered “brilliant”, designed the iconic VW Beetle, the German ‘peoples’ car’. A factory was built at Wolfsburg to manufacture the beetle, but during the war only 630 were made and given to the privileged few, including Hitler himself. Instead, the Volkswagen factory was used to make military equipment, with thousands of slaves making tank parts, mines and the ‘Kübelwagen’, an all-terrain bucket seat armoured car.

German brothers Adi and Rudolph Dassler established a successful sports shoe operation in 1920s and 30s, selling over 400,000 pairs a year by the outbreak of war. Both men were signed-up members of the Nazi Party, but Adi was more of a moderate, happy to do business with Jewish firms and later hiding a Jewish refugee. Rudolph, however, was more enthusiastic about Hitler’s policies, and joined the Gestapo. The siblings began to argue about politics, and eventually fell out spectacularly during an allied air raid on their hometown.
The brothers’ company was divided, with Adi calling his business Adidas, while Rudolph called his Puma. The bitter feud would continue for the next 60 years, but both of the Nazi brothers’ companies would be become giant brands of the sportswear market. 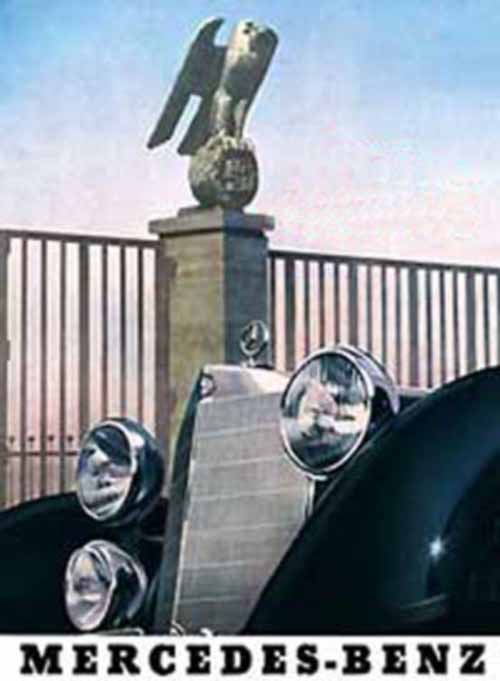 This 1938 advert shows that Mercedes-Benz was a company proud to be part of the Third Reich, with their latest automobile parked outside Hermann Goering’s Air Ministry in Berlin. Above the car’s bonnet is an eagle and swastika, the emblems of Nazi fascism. While Mercedes is widely known for manufacturing luxury automobiles, during Germany’s rearmament and throughout the war the company produced military hard wear including engines for the Luftwaffe’s Messerschmitt fighter planes.

This 1950s magazine advert promotes a Siemens television set. Today the company is associated with all manner of technologies from electronics and communications, to transport and alternative energy. The family-run business struggled in the Great Depression, but in the 1930s the company expanded and played a crucial role in establishing and funding the Third Reich.
With the war came massive contracts for Siemens to produce military equipment, communications, power sources, gas chambers and such like. The company built factories close to the death camps at Auschwitz and Buchenwald, and made use of slave labour from the inmates. When no longer useful, these slaves faced extermination in gas chambers that still bear the Siemens logo, poisoned by Zyklon B poison gas. In 2001, the company, astonishingly, sought to patent the name ‘Zyklon’ for some of its products including gas ovens, a remarkably bold move for one of the flagship brands of Nazi Germany. 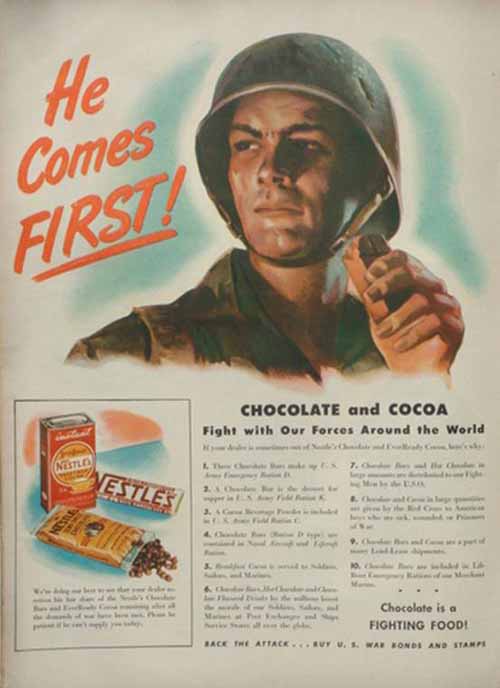 This advert appeals to American patriotism, encouraging shoppers to buy Nestle to help US soldiers, since “chocolate is a fighting food!” The company’s role in the war, however, is murkier than the advert suggests.
In 1933, Nestle financed the Swiss Nazi Party, and while Switzerland remained officially neutral during the war, the country’s banks were filling with money taken from Holocaust victims. Nestle was richly rewarded with its support of Nazism, winning the contract to supply chocolate to the entire German army, so soldiers on both sides of the conflict could enjoy the company’s delicious confections.

This 1946 ad promotes German company Bayer, the biggest pharmaceutical company in the world, best known for making Aspirin, which is arguably the most commercially successful drug ever. While the company is proud of its achievements and products, it has a number of issues relating to the Nazi era that it may not be quite so keen to promote. 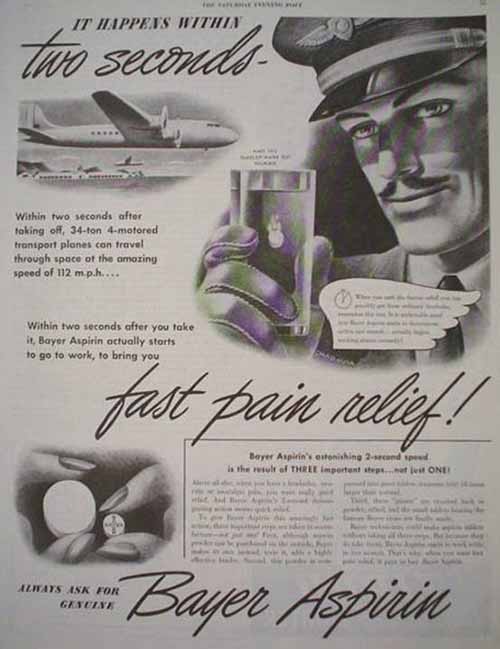 During the war, Bayer sponsored Nazi Dr. Josef Mengele’s experiments on human subjects at the Auschwitz death camp. Fritz ter Meer became the company chairman in 1956, even though the Nuremburg Trials had previously convicted and imprisoned him for his experiments on inmates at the camp.
Aspirin was formulated and named by scientist Arthur Eichengrün. In 1934, Bayer wrote Eichengrün out of the history books because of his Jewish origins, and instead credited Felix Hoffman with the discovery, a suitably ‘Aryan’ scientist in the eyes of the Nazis.
Bayer was also part of IG Farben, a large conglomerate that produced the killer Zyklon B poison for use in the Nazi’s gas chambers. The gas was invented as an insecticide but adopted by the Third Reich to exterminate humans. Nobel prize-winning German chemist Fritz Haber oversaw the invention of the gas. Under Hitler’s rule Haber attempted to play down his Jewish origins and created weapons for the Reich, but was forced to flee the country in 1933 despite his contribution to the German war effort. The chemist’s wife shot herself because of his work with the Nazis, and he himself died of a heart attack in exile, while many of his relatives were murdered using Bayer’s gas, a product he had helped create.
All images are sourced from Flickr.

Cartridge Save is the UK’s biggest online retailers for printers, inks and toners. Discover our incredible range today and enjoy free,next-day deliveries on all orders.