Everyone knows a break-up is never easy. There’s the heartache, the hatred, the tears  – and then, like you needed reminders of a crush gone wrong, there’re pictures which adorn our walls, our parents’ walls and are posted all over social media.

We know that a printed photo can be a treasured memory, but what happens when that memory gets tarnished?

We’ve delved into the minds of the great British public to find out exactly how they feel about pictures of their ex – and what they do with them when the honeymoon’s over.

We surveyed 1,500 Brits to find out how many of us are clever at cropping – and how many hang on their photos refusing to remove their ex’s face from their lives.

Are we all cut-throats with hearts of steel or are men sobbing over print outs while vengeful women go voodoo? Well, the results are in…. 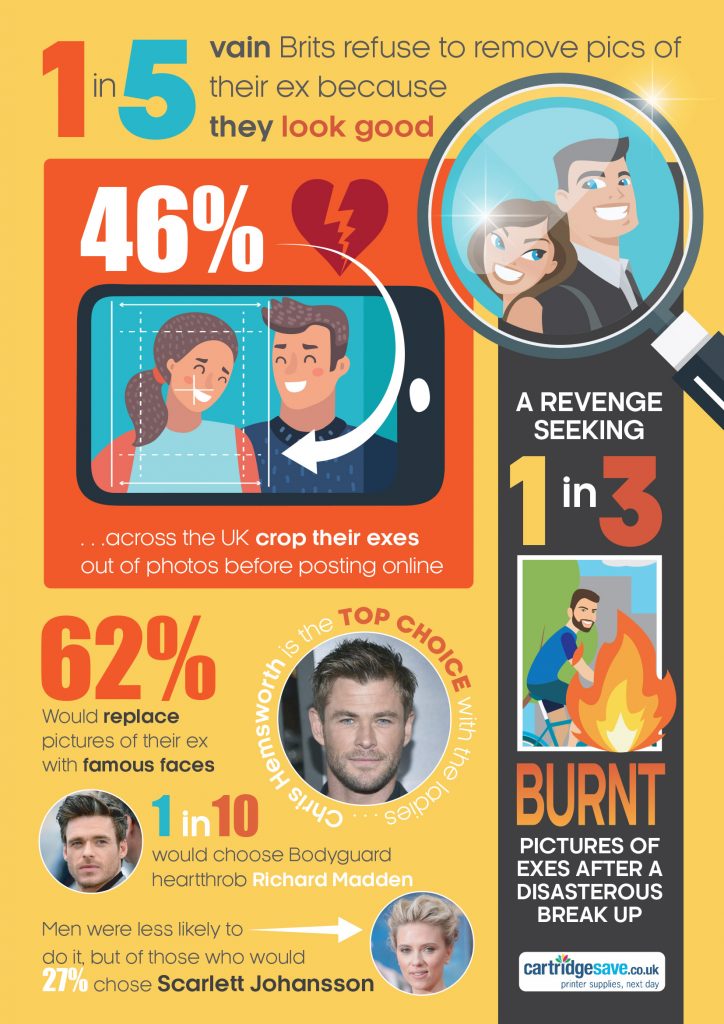 Our research revealed one in five vain Brits refuse to remove treasured images – ex included or not – simply because they look good.

Across the country, nearly half of scorned lovers said they cleverly crop pictures of their ex out before posting selfies online.

But a revenge-seeking one-third of us have BURNT pictures of exes following a disastrous break-up.

A whopping 62 per cent of us would replace pictures of our ex with famous faces – and topping the list in popularity stakes with the ladies was Avengers star Chris Hemsworth.

More than a quarter (27 per cent) picked out Thor to take centre stage in pictures over their former flings. Meanwhile just one in ten would choose Bodyguard heartthrob Richard Madden.

Men were less likely to go to the extreme of using famous faces to cover up their past conquests – but for those that did Scarlett Johansson came out on top with almost a third (27 per cent) choosing the stunning blonde.

Of those surveyed by cartridgesave.co.uk, it was family photos that made them cringe the most, with 66 per cent saying they were mortified at the thought that photos of their ex on holiday or at a wedding were on the walls of their family home.

Whilst one in ten admitted there were actually pictures of their new partner’s prom photos with an ex in the family home, making relationships with potential in-laws even more strained.

While we all have it in us to go a little “cray-cray” following a break-up the research showed that it’s the Geordies who are the most likely to take break-up reactions to the extreme.

One in three (61 per cent) said they would burn or deface a picture of an ex.

While only one in five (22 per cent) in the East of England would choose to get creative with a pen.

Meanwhile, a whopping 39 per cent of Brits living in the North West of the country said they would also BURN a picture of an ex. 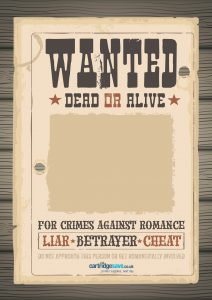 Amongst the stranger revelations from the survey were admissions of using emojis to cover up faces, malicious use of scissors on photos and attaching them to ‘WANTED’ posters to warn others of the danger.

So, for those of you who like to get particularly creative, we’ve included some ‘face-in-the-hole’ style templates in case revenge and public humiliation is what you’re into… 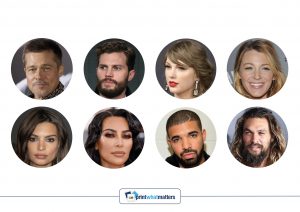 If you look great in a photo, there’s no need to bin or delete it – just use these handy stickers to mask over the ex. Especially useful if you’re holding out hope that the one that got away might come back into your life.

We surveyed 1,500 people to see which famous faces came out on top.

Whilst Chris Hemsworth and Scarlett Johansson were most desirable we thought we’d make it even easier for cropping fans and have produced these stickers to help out the love-sick Brits who might just be hoping for a temporary break-up.

We Want To Hear From You

Now, we can’t cater to all tastes so if there’s a face you’d really like included in our break-up sticker gallery, fill in the form below. The most popular requests will be added to the line up.