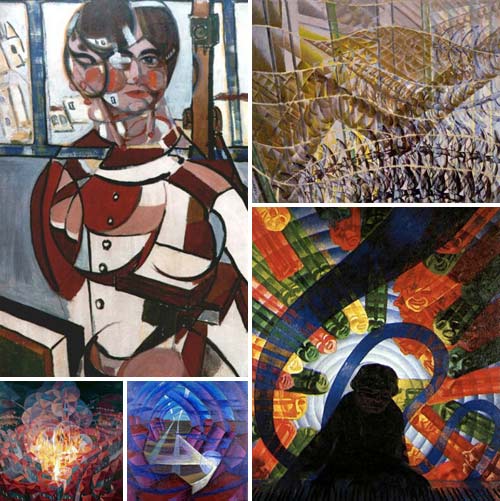 Italian writer Filippo Tommaso Marinetti founded Futurism when he published his Futurist Manifesto in the Parisian newspaper Le Figaro on 20th February 1909. Marinetti passionately laid out his ideas, which would form the central concepts of the movement. Futurism was a key artistic and social development in 20th Century art history, originating and most active within Italy, but also a movement whose ideas spread to Russia, England and beyond. 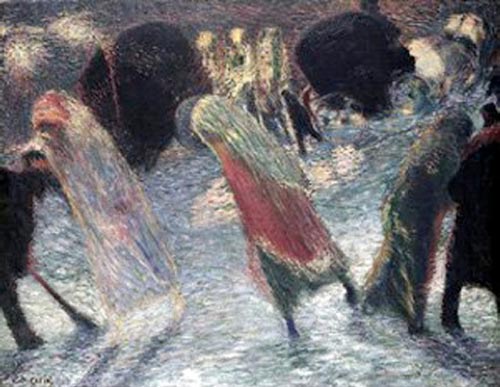 In the Futurist Manifesto, Marinetti declared his hatred of old artistic and political traditions, and a love of new technologies, for travel and warfare, for nationalism and violence. The Futurists would reject political correctness and embrace any new cultural innovation, "however daring, however violent", which proudly displayed "the smear of madness". 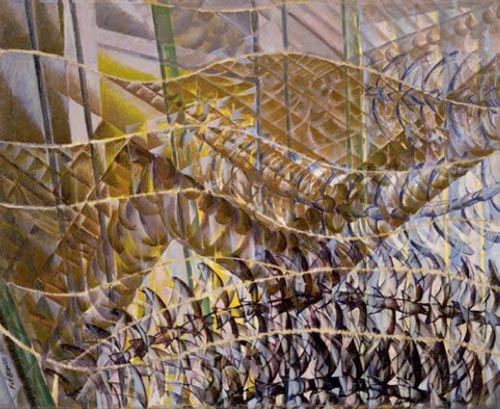 "We want no part of it, the past", Marinetti wrote, "we the young and strong Futurists!" After launching his manifesto, the writer was soon joined by painters Umberto Boccioni, Carlo Carrà, Giacomo Balla and Gino Severini. These painters, mainly based in Milan, would form the core of the Futurist group. 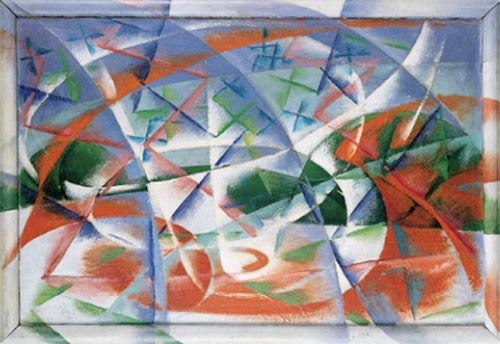 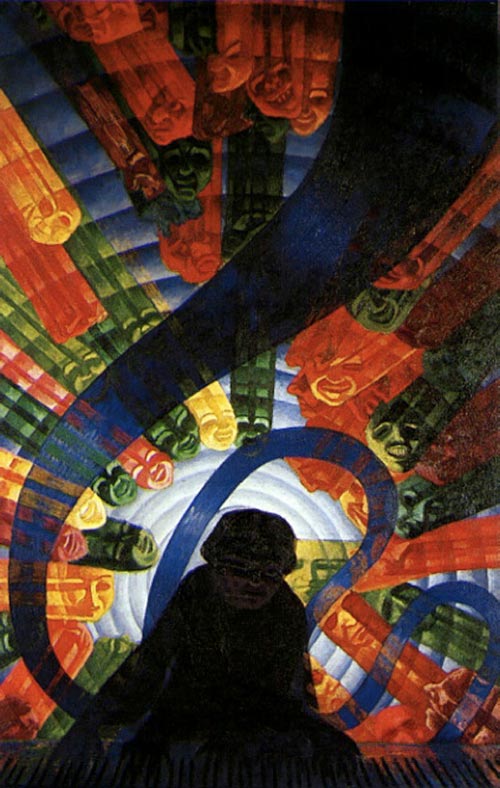 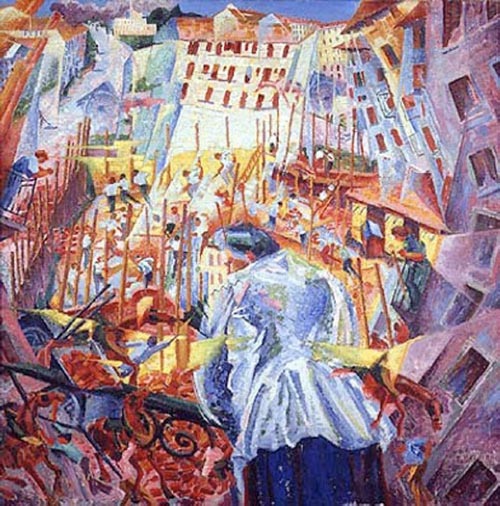 While the original manifesto rejected the old and celebrated the new, it set out no specific artistic vision. The Futurists attempted to clarify their aesthetic ideals in their Technical Manifesto of Futurist Painting, which insisted that pictures must represent a universal dynamism, where objects in the world are not separated and are in constant motion. These elements would be reproduced on the painted surface. 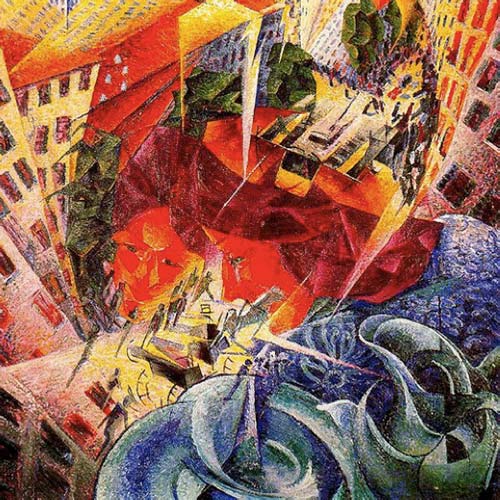 Much Futurist painting attempted to capture forms in motion by blurring or overlapping and repeating images in the manner of multi-exposure photography. The broken forms of Cubism and the splintered light of Neo-Impressionism heavily influenced the painters. In its early forms, Futurist painting adopted the techniques of Divisionism, in which light and colour are fragmented into individual dots and stipples. 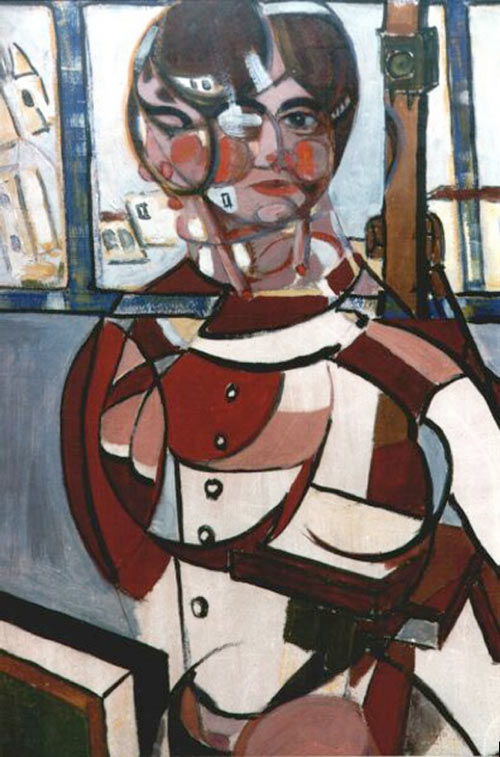 The Futurists most often found their subject matter in the urban environment, revelling in the modern city’s life, machines, new vehicles, power, violence and pollution. In his 1911 painting The Funeral of the Anarchist Galli, Carlo Carrà depicts a scene in which he was involved, as anarchists and police clashed at a funeral during one of Italy’s general strikes.

The Funeral of the Anarchist Galli [Carlo Carrà, 1911] 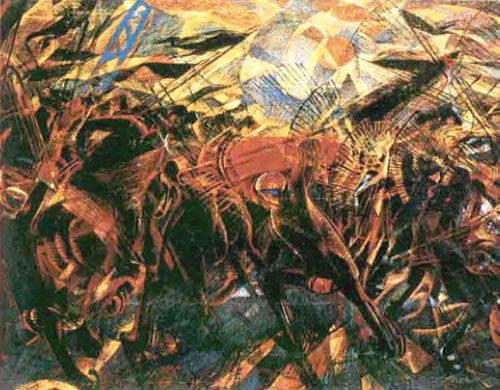 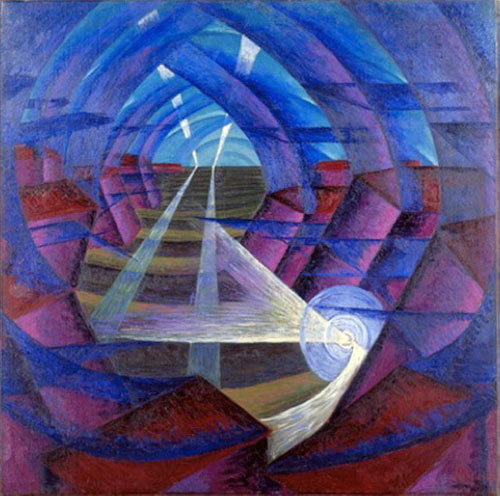 The Futurist painting style evolved and diversified, with many artists employing a Cubist style, while others adhered to a Divisionist, Impressionist aesthetic. Futurists branched out into other art forms and means of communication such as sculpture and theatre. 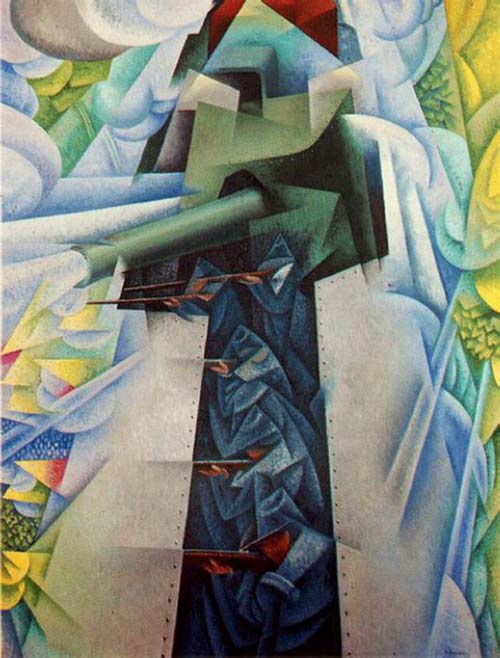 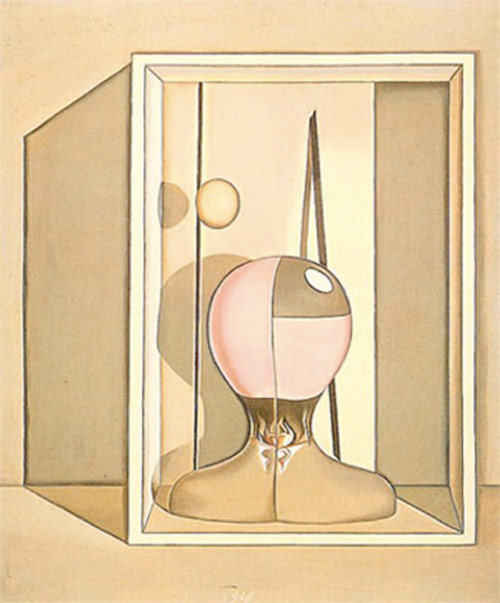 In 1914, personal and artistic tensions came to a head resulting in a rift between the Milan group, which had Marinetti, Boccioni, and Balla as its prominent members, and the Florence group, which centred around Carrà, Ardengo Soffici and Giovanni Papini. By the end of 1914, the Florence group had formally announced their withdrawal from the Futurist movement. The first phase of Futurism was over, and Europe was about to be plunged into the horror of the Great War. 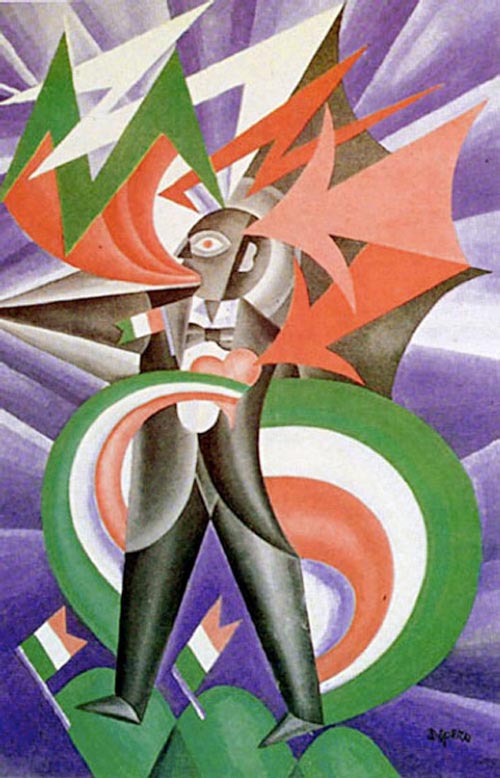 When Italy declared entry into the First World, many Futurists signed up to fight. From its inception, the movement was nationalistic and promoted violence, so naturally many saw the war as an opportunity to demonstrate their ideals. "We will glorify war - the world's only hygiene - militarism, patriotism, the destructive gesture of freedom-bringers, beautiful ideas worth dying for" the Futurist Manifesto had stated in 1909. 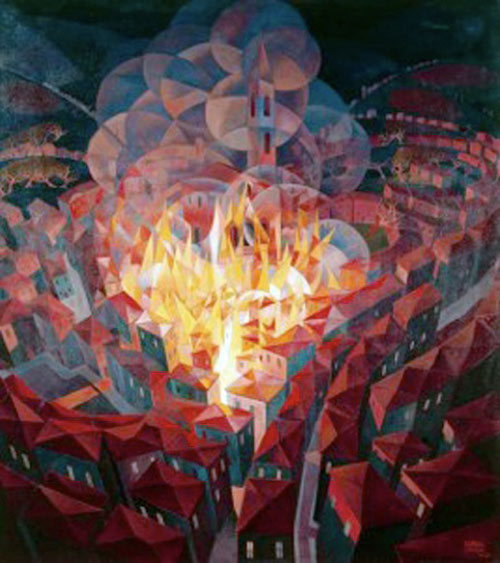 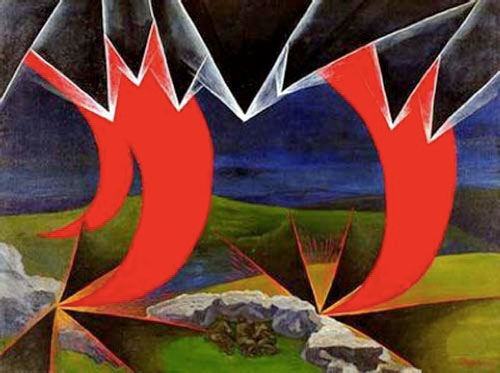 Futurism had effectively ended with the outbreak of war, but at the conflict’s end Marinetti set about revitalising the movement. This period became known as the Second Futurism, and the development can be roughly divided by decades: Plastic Dynamism, Mechanical Art in the 1920s, and Aeroaesthetics in the 1930s. 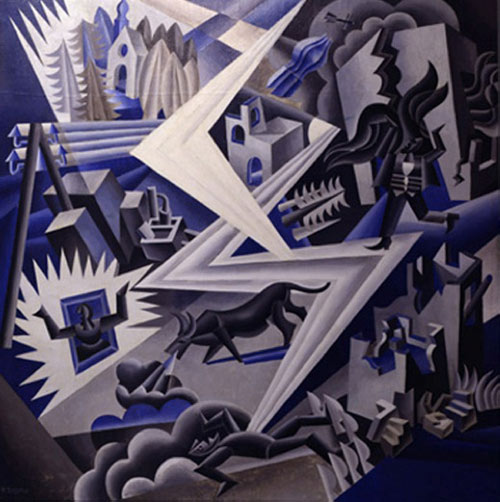 In the 1920s and 30s Benito Mussolini’s fascists took political control of Italy, and many Futurists were keen supporters of fascism. Both trends were extremely nationalistic, opposed democracy, held radical ideas and admired political violence. 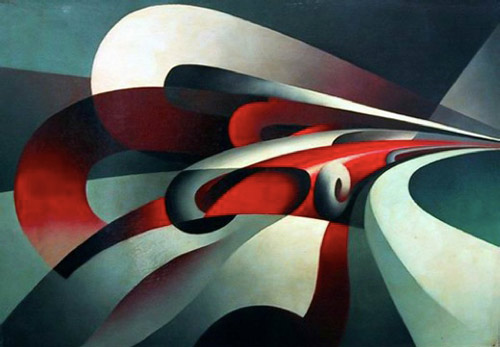 Marinetti wanted Futurism to become the official artistic style of Italian fascism, but Mussolini resisted and encouraged a wide range of styles to keep artists of all types on the side of the regime. While Futurism would ultimately be linked to fascism, there were many socialist and anarchist Futurists, linked by an interest in political violence. Towards the end of the 1930s, Italian fascists were adopting the stance of their German counterparts, considering modern art to be degenerate and rejecting the Futurist movement.

The Miracle of Light While Flying [Gerardo Dottori, 1931] 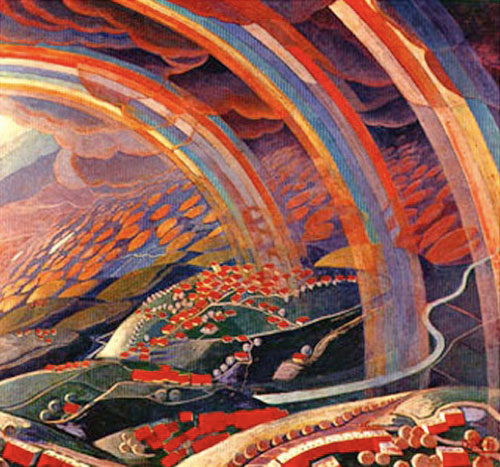 The Futurists had always embraced new technologies, particularly military hardware, and the development of ‘˜Aeropainting’ in the 1930s and early 40s was a key part of the movement’s later stages. Artists, many of whom had flown planes themselves, produced aeropainting with varying degrees of abstraction, realism and dynamic force. 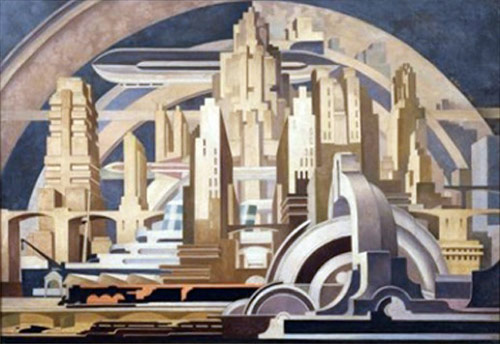 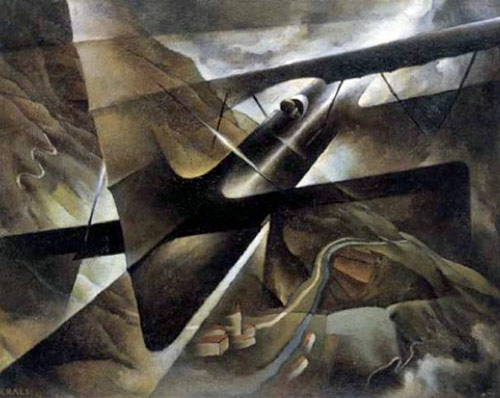 Self-taught painter Tullio Crali joined the Futurists in 1929 and developed the aeropainting style with his realistic depictions of flight, based on his own experiences of flying. In his 1939 painting, Nose Dive on the City, he represented, and perhaps celebrated, the new concept of attack from the air, with a fighter pilot’s eye-view of dive-bombing. 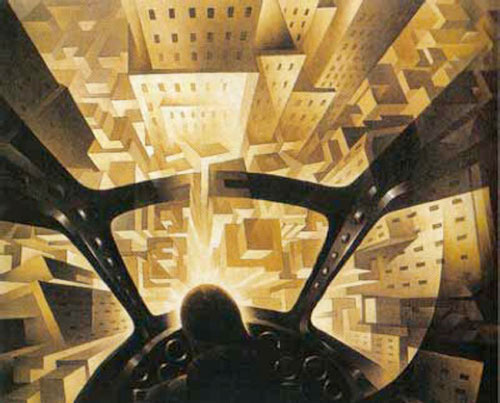 In 1944, Marinetti, the founding Futurist, dropped dead from a heart attack whilst compiling a collection of poems applauding the Italian war effort. Futurism effectively ended with his death. Whilst it was a controversial movement, Futurism had a profound influence on subsequent art developments including Art Deco, Vorticism, Constructivism, Surrealism and Dada, an influence that has reached far into other spheres of cultural activity.