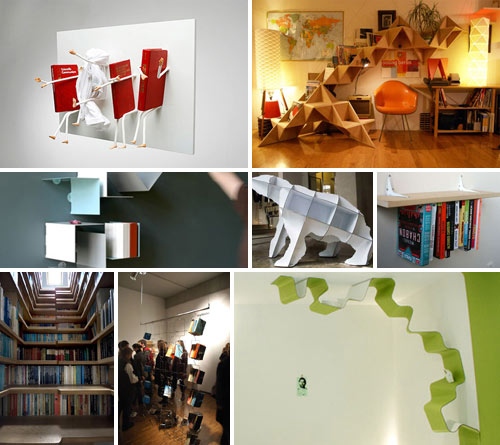 In the world of design, anything is susceptible to an image overhaul. Even the most uninspiring of household furniture, a bookshelf, for example, can be redesigned until it, well, no longer remotely resembles a bookshelf. And this is exactly what design is about; seeing something from an angle that no-one else has seen, and making it real. The results are here for all to see. Some are practical, some are space-saving, others are simply stunning to look at.

So if you're thinking of a living-room redesign, take some inspiration from the cool bookshelves below and liven up your literary collection! 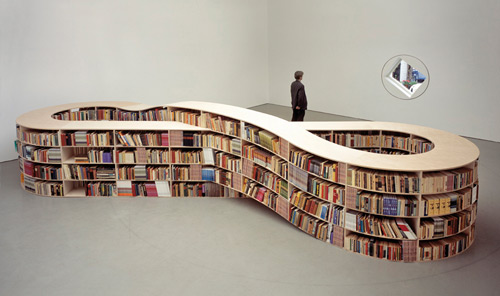 Designer Job Koelewijn broke the mould when he designed his Infinity Bookcase. Using the mathematical concept of Lemniscate as a design basis, similar to that of the Mobius Strip, Koelewijn's bookcase is a physical representation of infinity, as it only technically has one continuous side. Which means that if you read all the way around the bookcase, you would be reading forever. And ever. 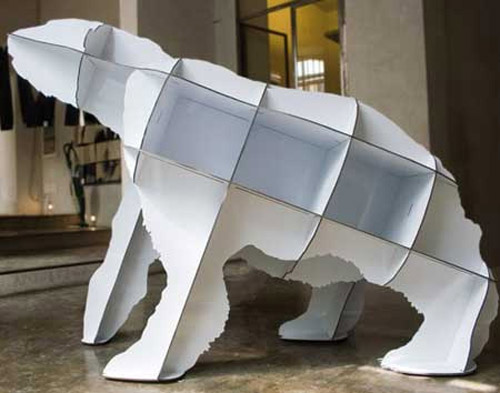 An explanation as so to what the Polar Bear Shelf would perhaps be a little patronising. In short, it's a shelving unit in the shape of a polar bear, but you knew that already. A superb piece of novelty furniture, especially for an animal lover, the polar bear shelf is also incredibly practical, as it's near 'to scale' size means there is enough room for all your books - plus your next-door neighbour's. 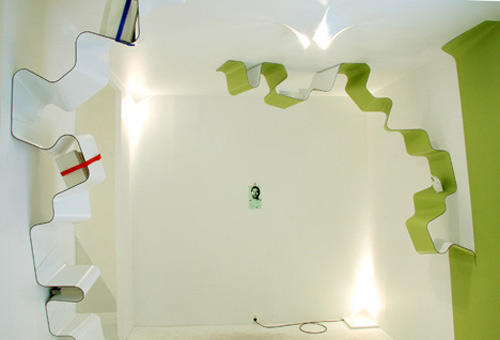 The days of digging out your dusty spirit level to make sure your new shelves are completely flat are a thing of the past if Andreas Hegert's shelving design is anything to go by. With no acknowledgement to the linear or the right angle, his trio of shelves simply resemble scribbles on paper moulded into shelves. With shelves ranging from 40cm to one metre in length, the design is, on paper, as practical as the standard bookcase, although as these images demonstrate, this is unlikely to be the case. 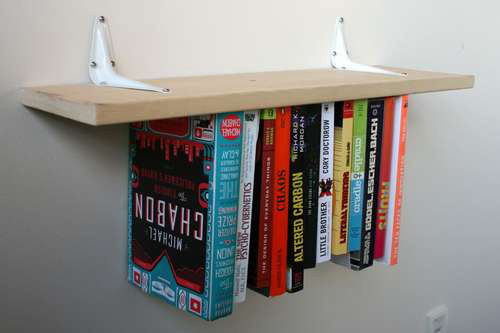 Without the books attached, the Inverted Bookshelf looks more like a piece of drunken DIY gone badly wrong. With a selection of books hanging below, it looks like a David Blaine optical illusion, and will definitely confuse your guests for a little while at least. Instead of supporting your books from the bottom, the Inverted Bookshelf suspends them underneath, without, of course, not damaging the books in the process to create an entertaining little optical illusion. 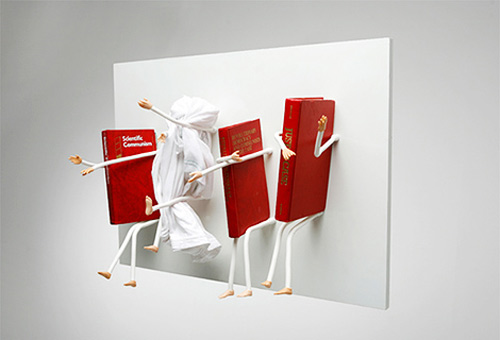 As a design, the Movement Bookshelf is probably one of the most opinion splitting bookshelves on the list. Bent nails are placed in formation to hold individual books in position, the end result being a series of what look like book-based cartoon characters sitting on your wall. For some, shelves don't come much cooler. For others, the giant polar bear is a much more viable option all of a sudden. 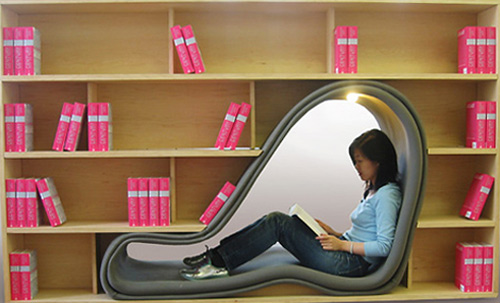 It may seem like a mere novel idea on the surface, but the Cave Bookshelf is a lot more practical than it looks. Given the need that many homes have for extra space, the Cave combines a bookcase and a chair without the need for any extra room. As well as providing a novel environment for reading, it can even act as a partition between two rooms, allowing you to maximise your living space. In fact, the Cave is probably more of an interior redesign tool than it is a bookshelf!

When it comes to flexibility, the Folding Bookshelf is unrivalled. Despite the strength of the cherry wood from which it is made, the bookshelf can be folded like paper, meaning you can fully customise your shelving and how you want your books to look. Place your books vertically or horizontally, or turn them 90° - however you want them to look, it's likely that the Folding Bookshelf can cater for it. 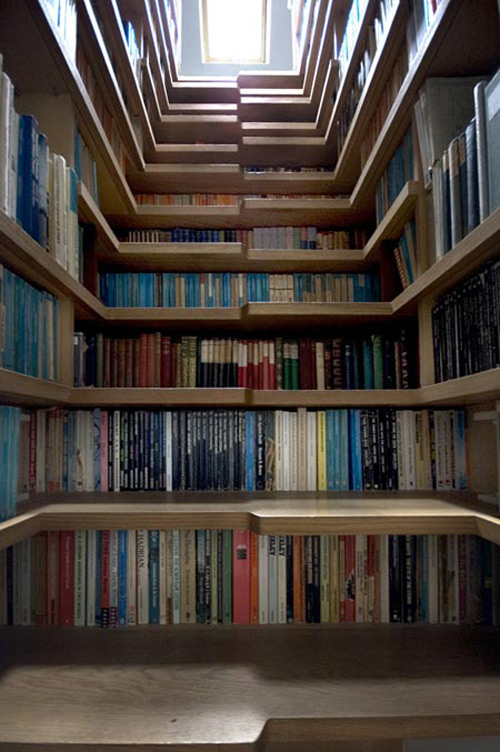 Owning a lot of books doesn't mean you have to dedicate one of your rooms to house them. In fact, there are so many spaces where you can not only store your books but make them a furniture centrepiece. In this London house, the stairs up the loft became individual bookshelves, and the space-saving result became a spectacular and unique design feature. However with a small library underneath and around the stairs, allow yourself more time for nipping downstairs for a glass of water in the middle of the night! 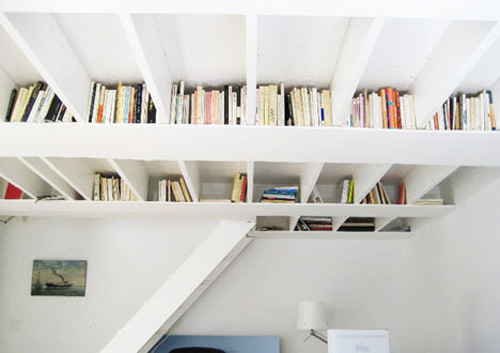 Leaving rafters exposed is now considered a design feature, as opposed to a sign of lazy builders leaving a job half done! What rafters also do is provide more storage space, such as this ceiling-book-shelving system. Perhaps better suited to storing older books, as regular trips up the step ladder may become a little tedious! 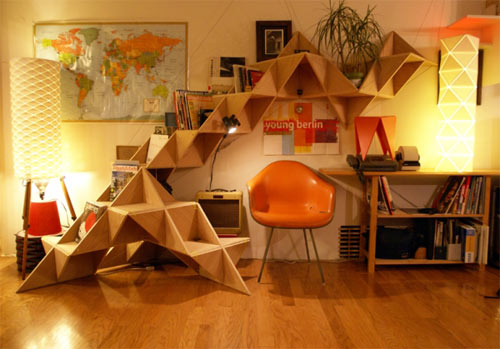 Introducing some storage space into a room used to mean a complete redesign to fit in a cumbersome bookcase or shelving unit. Not any more. This triangular shelving system consists of a series of (surprisingly) triangular shelves that fit together to mould around your existing furniture. Rather like ivy sprawling down the side of a building, the Triangle Shelf can be perfectly incorporated into your room's current design, and, by adding more shelves, should be able to cope comfortably with your book collection. 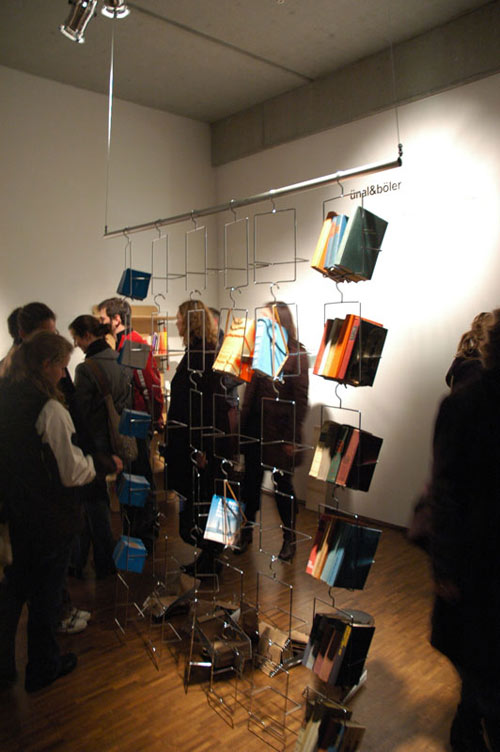 The Hanging Bookshelf was designed to reverse any preconceived ideas about the bookshelf being the heaviest and most cumbersome item of furniture in the room. Lightweight and fragile, the Hanging Bookshelf is suspended from the ceiling and keeps the books in suspension, making it easy for them to be plucked off and replaced at leisure. Probably not ideal to hang in the middle of the room with small children or animals around, though! 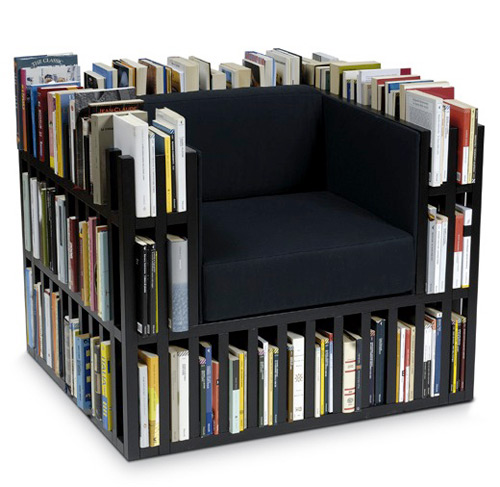 Ever sat down to start a new book, made yourself comfortable and remembered you hadn't quite finished the last one? With the Bibliochaise, your next read or your last one will always be in reaching distance, meaning you won't even have to get up to switch books. Shaped like a normal armchair, the Bibliochaise can store up to 5 linear metres of books at any one time in customisable shelves. 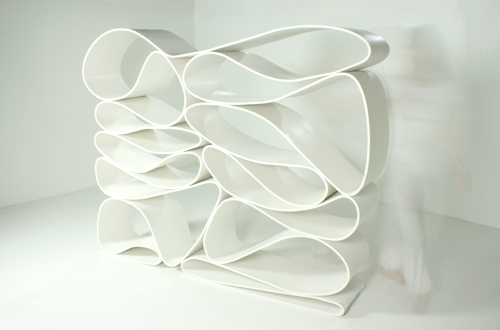 Sometimes practicality is simply forced to make way for stunning design. Not many bookshelves can claim that they represent the mathematical exploration into the concept of infinity, but this one does exactly that. You'll probably spend that much time looking for the 'end' of the shelf that your time spent reading will diminish, but it will prove an excellent talking point with new visitors to your house. The question of where to put it is the first issue to deal with, however.

The ultimate in personalising your interior design, Geometric Modular Shelving allows you to create whatever shape you like with individual square and triangular bookshelves. Create a scene on your living room wall, or if you're feeling vain, spell out your own name - the choice is yours. Oh, and they keep your books together too. 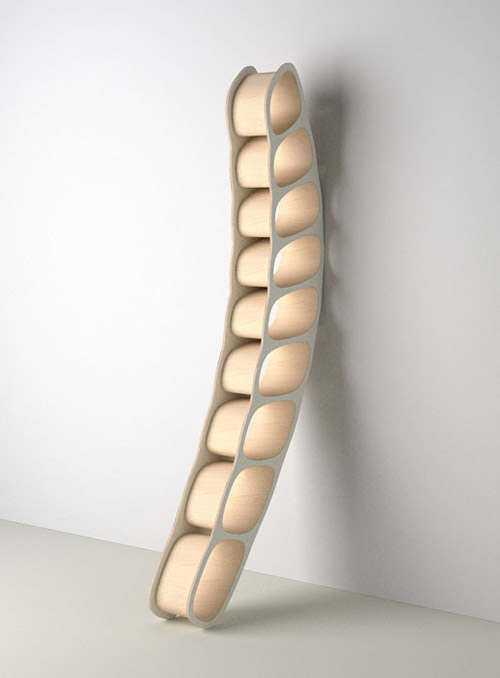 Similar to the Neverending Bookshelf (although not in design), the Cell Bookshelf is more like a piece of art than a practical piece of furniture. Somewhat resembling a pea pod, it features nine 'cells', gradually getting larger as they move down. Although not strictly a bookcase, the 'cells' are ideal for storing books, and even if you decide to keep your literature safely stowed in the attic, the Cell will look just as cool empty leaning in the corner. 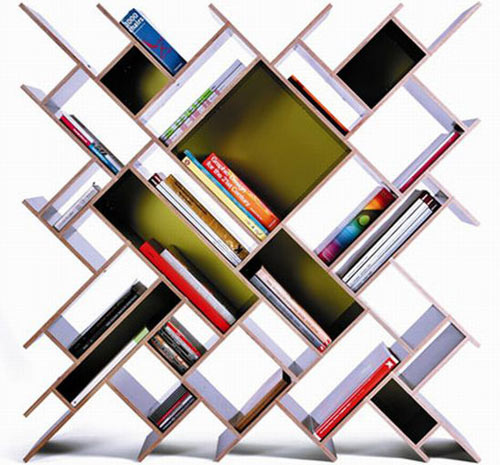 Great aesthetic design is one thing, but combining it with multi-functioning practicality is a well sought after rarity. The Quad Bookshelving system manages to combine the two effortlessly. Maximising space by using geometrical shapes to facilitate increased storage, the Quad Bookshelf is ideal for storing CDs, DVDs and files and folders as well as your books. And because of the design, separate Quad Bookshelves can be joined together when the time comes to expand your storage space, making them a worthwhile investment. 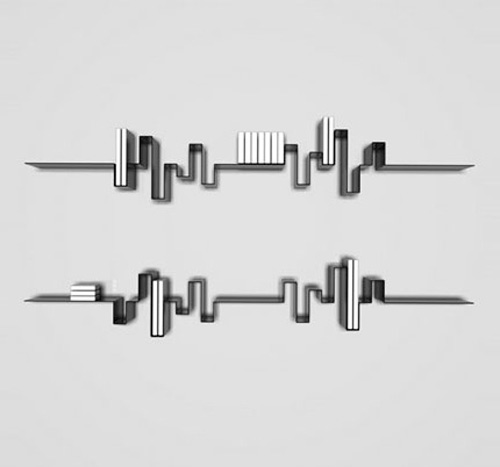 Young Dutch designer Frederick Roije's Storyline Shelf is perhaps the most uniquely and thoughtfully crafted shelf on the list on the list. Before designing, a word is processed into sound waves, and the physical shape produced is mirrored in powder-coated steel to create a completely individual design. So not only will your bookshelf be one of a kind, but it will also be a physical representation of a word of your choice. Oh, and it also stores a few books as well. 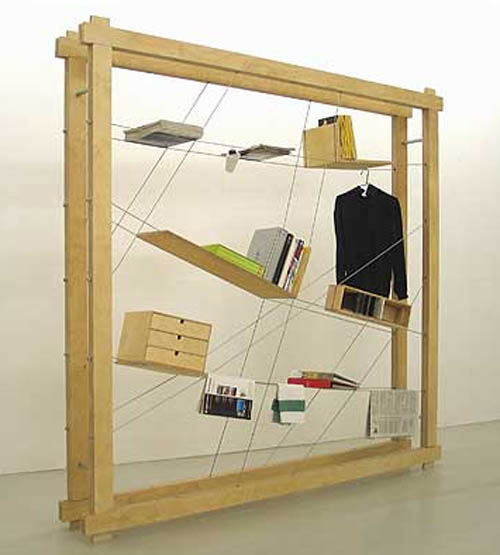 Designer Ward Huting's innovative storage system may push the boundaries of what can be defined as a 'shelf' somewhat, but for its ultimate customisability and striking design, it deserves a place in the list. The Brace Case itself clamps to the floor and ceiling hence it can be fully customised to fit whatever space you have available, and the brace cables can be attached at various angles, exactly as you like, meaning you can change their set up in order to store a bigger or heavier item, for example. Or just more books, for that matter. 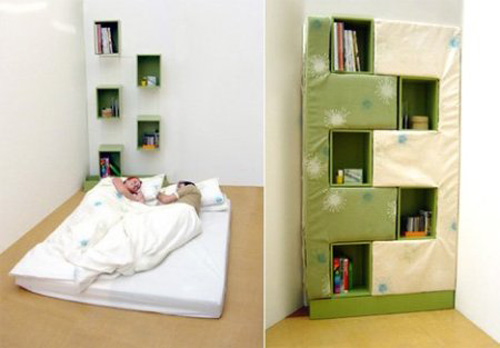 Forget blow up beds or sofa-bed combinations - if you're looking for extra sleeping space, Karen Babel's latest design is as spatially efficient as it is uniquely decorative. Consisting of four interlocking pieces that can be put together to make either a single or a double bed, the individual pieces of the Bookcase Bed slot around 5 storage compartments when not in use to create unusual bookcase. Whether or not you like the design, bedtime reading will never be the same again… 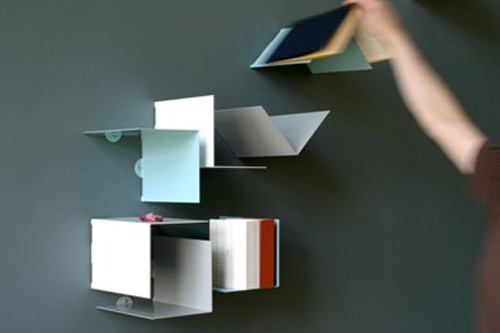 There are two things that every non-artistic person can draw; stickmen, and a flock of birds. So in homage to the latter, the Flying Vee shelving series was designed. Rather self-explanatory in name, each separate Vee can be fixed to the world in either a 'V' shape or a 'U' shaped, with books resting open on top of them. Whether you arrange them to look like a flock of seagulls, or use the varying shapes to differentiate between fiction and non-fiction, you'll be able to personalise your living room wall like never before.