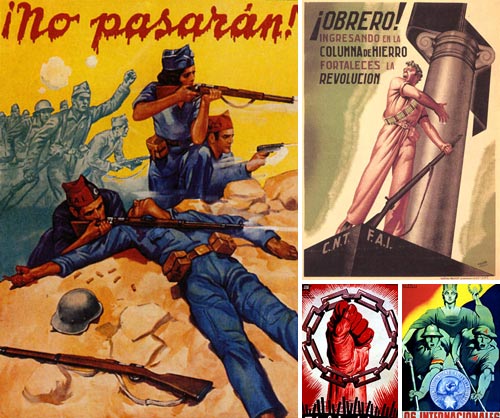 The Spanish Civil War was an extremely complex conflict that ravaged the country from 1936 to 1939. The war started when the Spanish Army staged a military coup to overthrow the Second Spanish Republic. The attempt would prove successful, with the eventual installation of a dictatorship led by General Francisco Franco in 1939. Before his victory, Franco’s forces met the resistance of republicans, socialists, communists and anarchists in a bitter battle for Spain.

Among the many aspects of the war that continue to exert a particular fascination today is the wealth of astonishing propaganda posters produced by the various factions involved in the fighting. There was a high rate of illiteracy in the country, particularly among women, peasants and the working classes, so poster designers employed rousing imagery and succinct slogans to deliver their message. 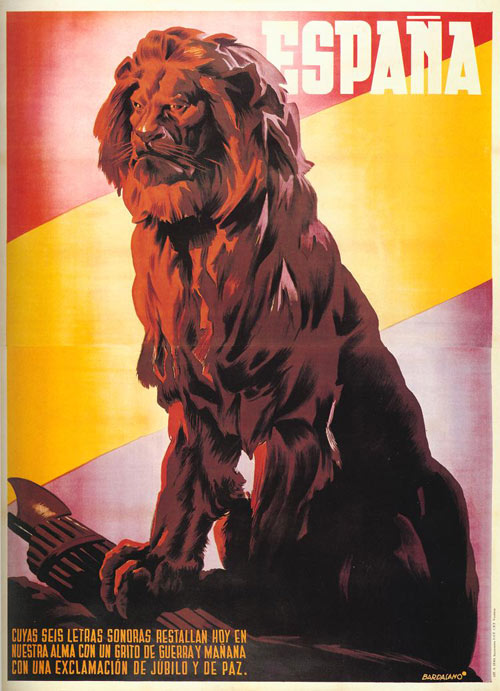 This poster aims to symbolise the strength and dominance of the Spanish state, embodied by the noble, towering lion. The message insists that citizens join the country’s unified protection. Ominously, the lion holds a fasces, a bundle of rods tied around an axe, the ancient Roman symbol of authority and strength through unity. In the 20th Century, Italian and Spanish fascists adopted the symbol to represent their ideology. 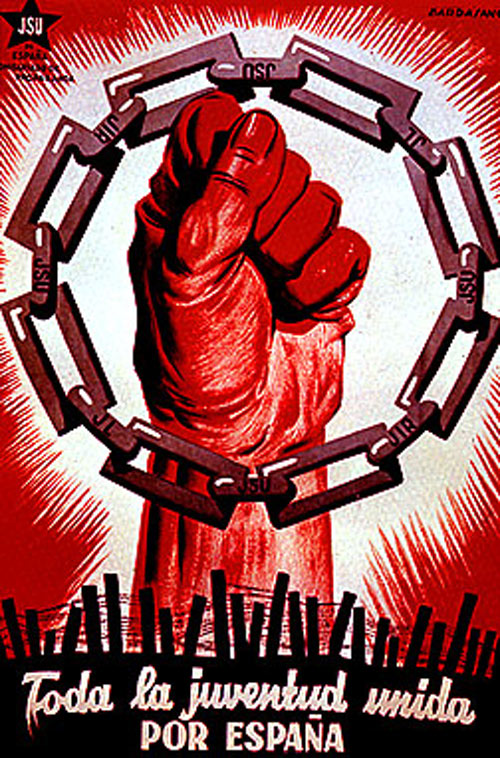 This poster employs a soviet-style aesthetic to attract Spaniards to the communist cause. Juventudes Socialistas Unificadas (JSU), Unified Socialist Youth, was formed in 1936 through the union of the Socialist Party and Communist Party youth groups. After the military collapse of the Republican Government, JSU’s leader, Santiago Carrillo, fled the country and spent 38 years in exile, mainly in France and the USSR. 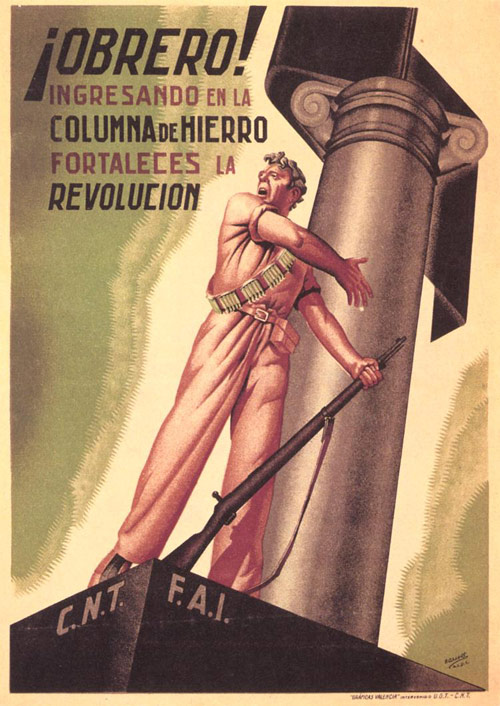 The Confederación Nacional del Trabajo (CNT), The National Confederation of Labour, is a confederation of anarcho-syndicalists, still operating today. The Federación Anarquista IbÃ©rica (FAI), Iberian Anarchist Federation, is an organization of anarchist militants active within the CNT. These anarchists were at the forefront of the battle against Franco’s forces during the Spanish Civil War, and produced a huge number of posters rallying the public to their movement. This poster urges ‘Workers! Joining the Iron Column strengthens the revolution.’ The Iron Column was a battalion of anarchists. 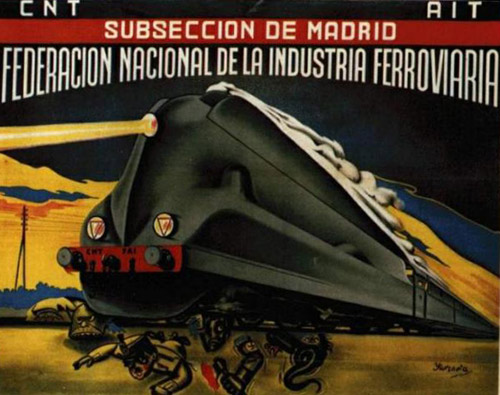 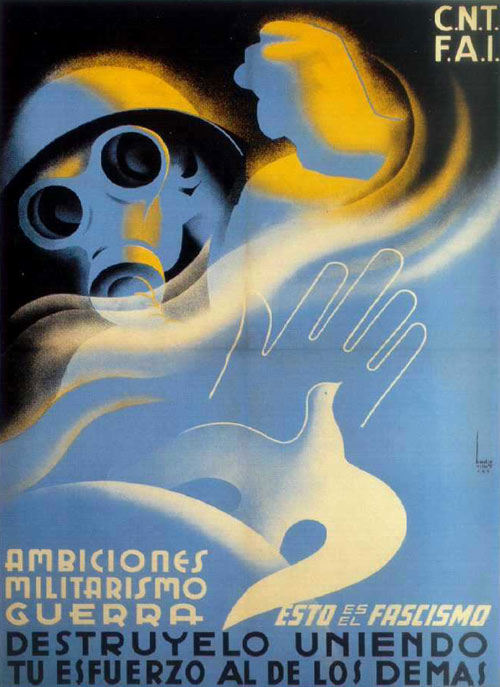 This anti-fascist poster depicts the ghostly image of a masked soldier wreathed in the vapours of a gas attack, hinting at the perils of chemical weapons. 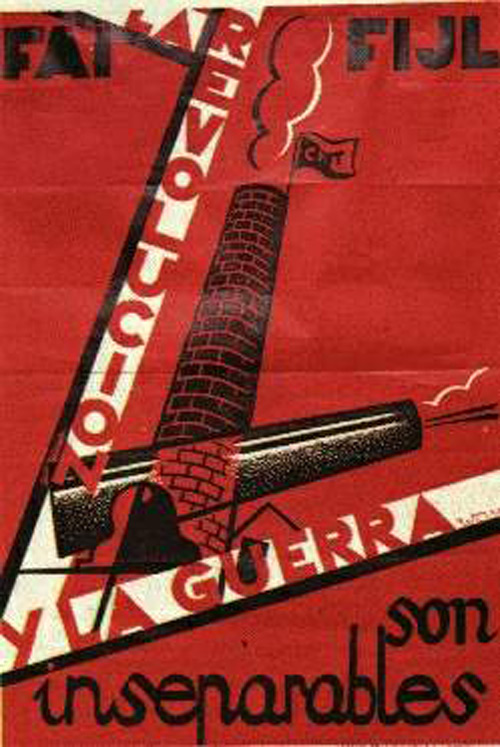 This poster states the opinion that revolution and war are inseparable, with the chimney and cannon reflecting industry and struggle. The design bares the stamp of both CNT and FIJL, Federación IbÃ©rica de Juventudes Libertarias, The Iberian Federation of Anarchist Youth, an organization created in 1932 in Madrid. Towards the end of the war Stalin issued the order from Russia that the Spanish anarchists should be liquidated. The communists accordingly murdered many members of FIJL. 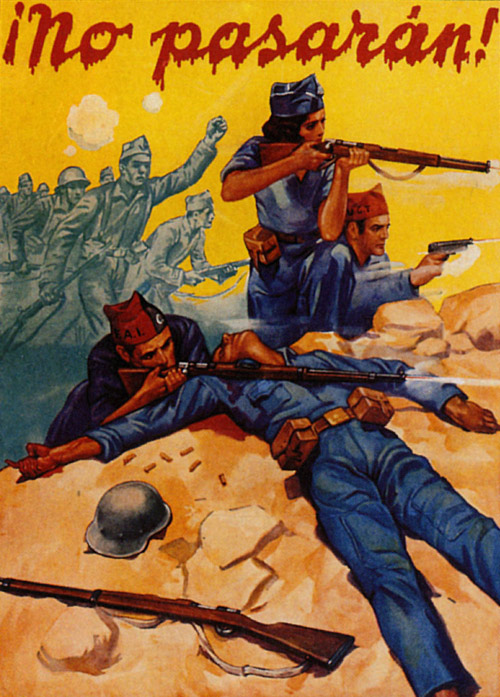 ‘No pasarán!’ – ‘They shall not pass!’ Men and women fight and fall on the front line against the fascists.

Republican leader Dolores Ibárruri Gómez used the slogan in a speech during the Siege of Madrid in 1936. When Franco’s forces conquered the city his reply was ‘Hemos pasado’ – ‘We have passed.’ 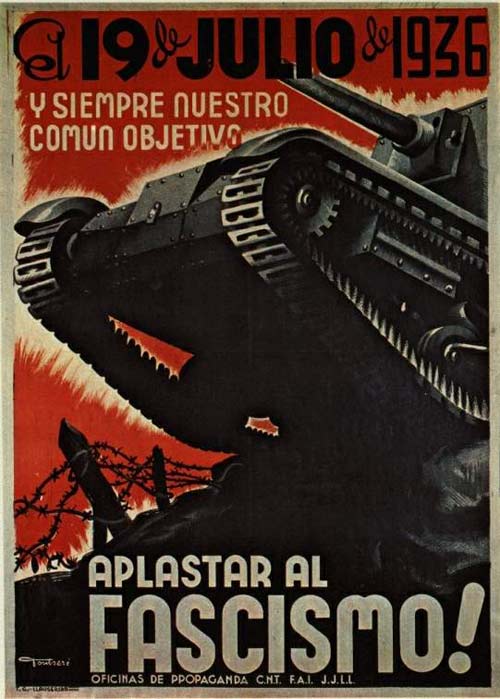 This poster from 1936 declares the objective of smashing fascism. The Spanish Civil War saw the development of new tank warfare tactics and air bombing campaigns, strategies that would be put to widespread and deadly use in the Second World War. 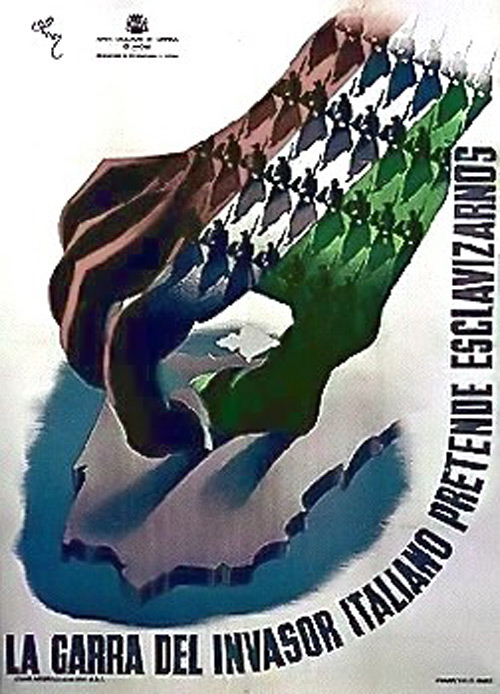 A key aspect of the Spanish Civil War was the international dimension, with Fascist Italy and Nazi Germany supporting Franco’s army, while the Soviet Union, Mexico and the International Brigades backed the Republicans. This poster warns that the claws of Italian invaders intend to enslave Spain. At the time Italy was ruled by Mussolini, one of the founders of European fascism.

The Internationals - United with the Spaniards [1937] 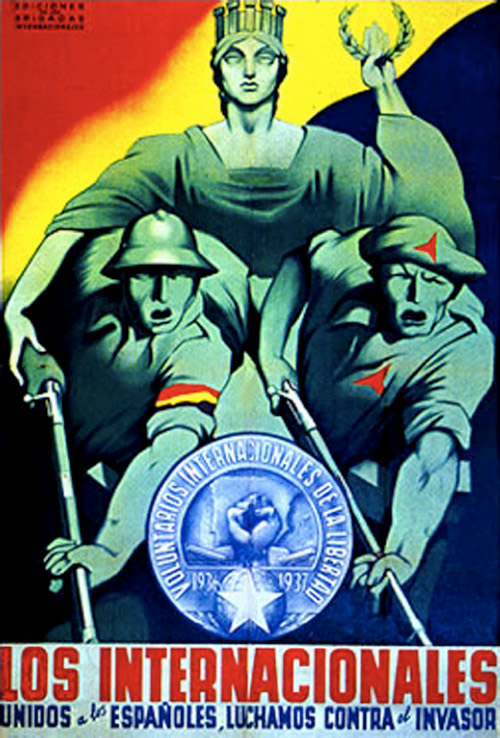 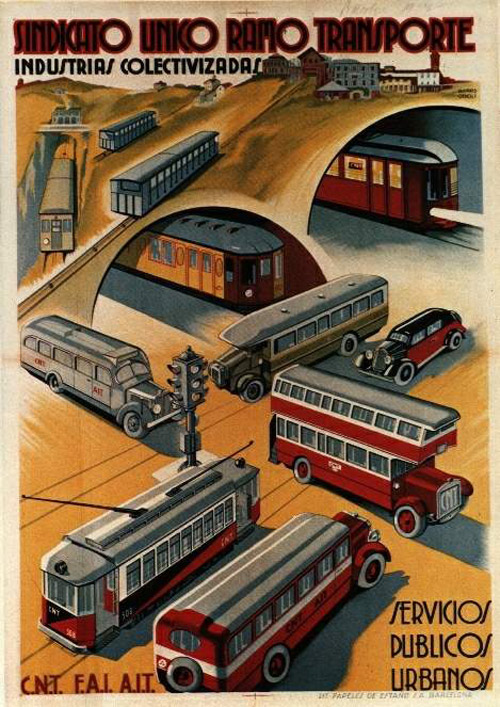 This poster depicts worker-run public transport. The trains, metro, buses and taxis are stylishly decorated in black and red, the traditional colours of the anarcho-syndicalists. 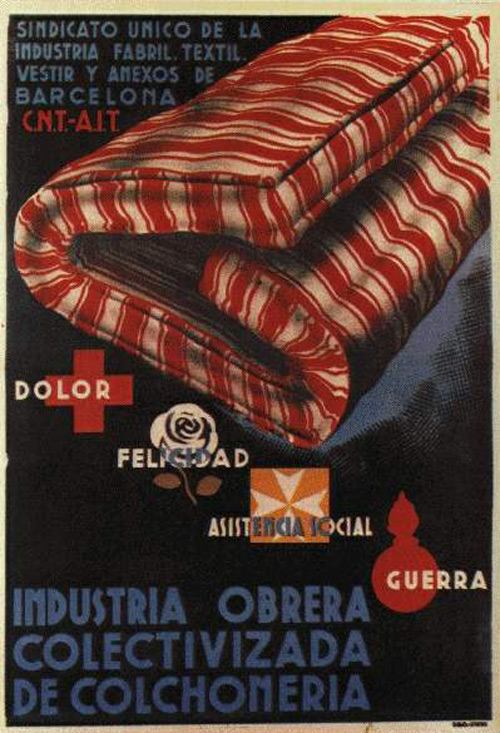 This poster comes from the mattress makers of Barcelona, and demonstrates how all aspects of industry were deemed essential in the battle against fascism. 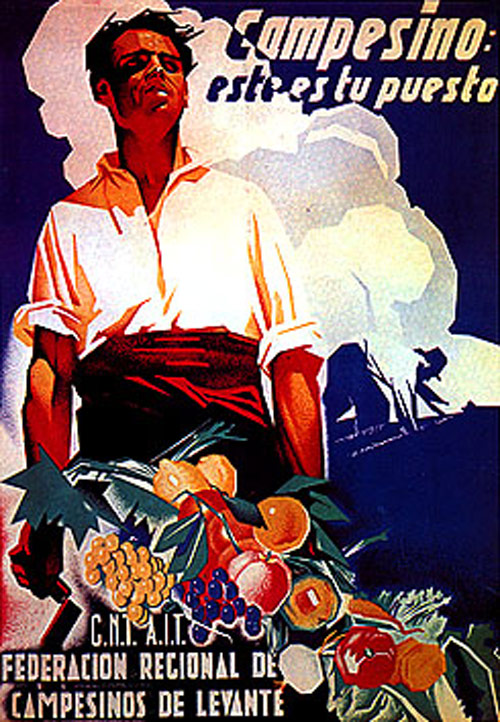 ‘Peasant: This is your place’ declares this poster, reminding rural workers of their importance in feeding the revolution. 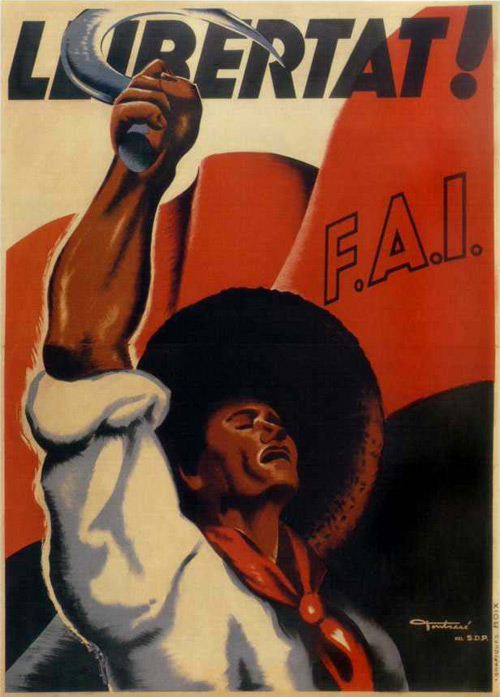 ‘Freedom!’ cries this poster, with the muscular worker waving a sickle in front of the black and red of the FAI flag. 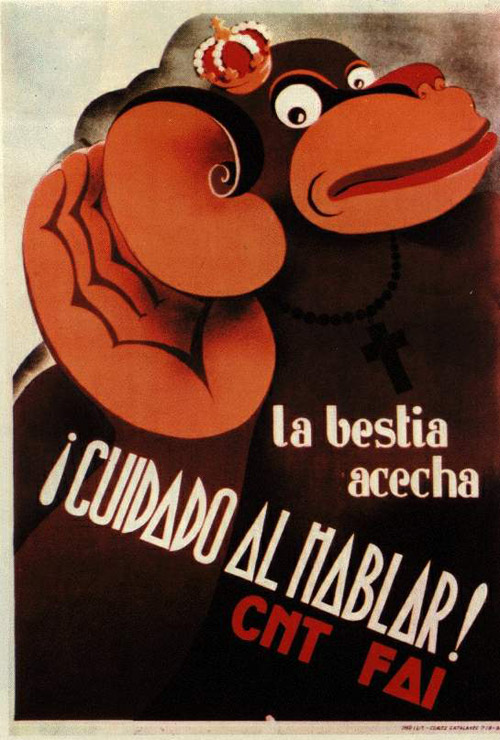 ‘The beast prowls: Careful while talking!’ warns this poster. Similar posters were to be made in Britain during World War Two with messages such as ‘Careless talk cost lives’. The designer of this poster clearly saw monarchism as the enemy, with the ‘beast’ sporting a dainty crown. 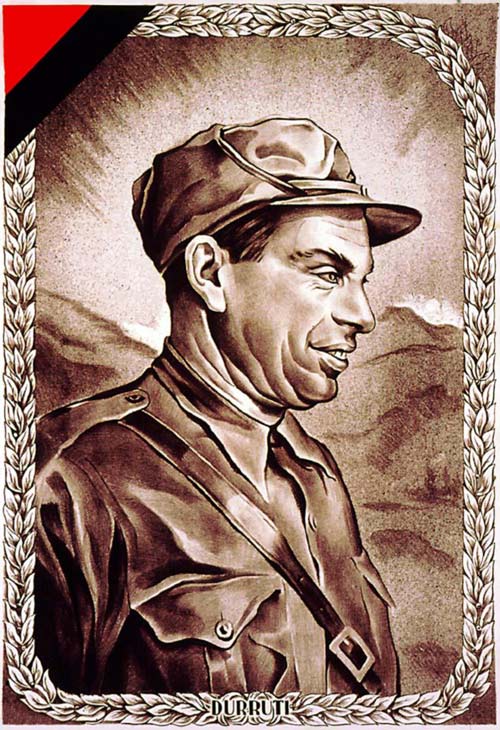 This poster portrays Buenaventura Durruti Dumange (1896 – 1936) who played a central role in Spanish anarchism before and during the civil war, helping to co-ordinate armed resistance against Franco’s forces and leading the Durruti Column. He died during the Battle of Madrid in 1936. The anarchists claimed an enemy sniper shot Durruti, while others report that he was the victim of a ‘friendly fire’ incident, killed when his comrade’s gun was accidentally discharged. 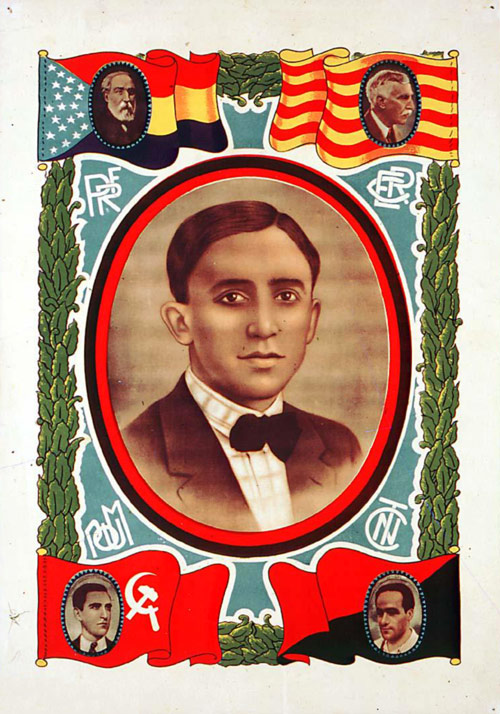 The central character celebrated in this poster is Francisco Ascaso (1901 – 1936), a Spanish anarcho-syndicalist who took part in violent insurrectionist activities during the 1920s and 30s, both within Spain and internationally. He was killed during the civil war, on the first day of fighting in Barcelona. 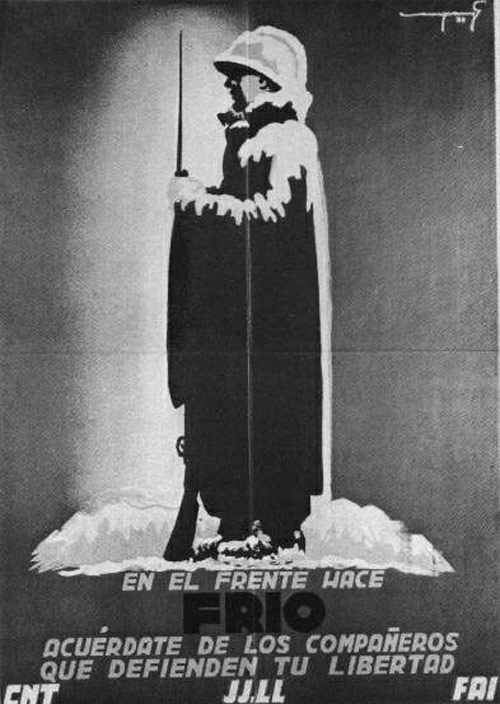 ‘It’s cold on the front’ states this poster, and asks Spaniards to ‘remember those who defend your freedom.’ 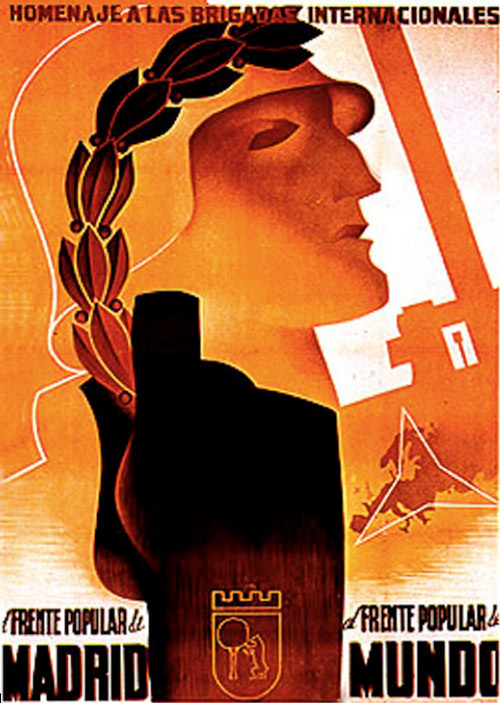 Homage to the International Brigades, military units composed of volunteers who travelled to Spain to join the Republican army. Anarchists, communists and socialists from around the world, mainly Europe, fought alongside Spaniards in the struggle against fascism. 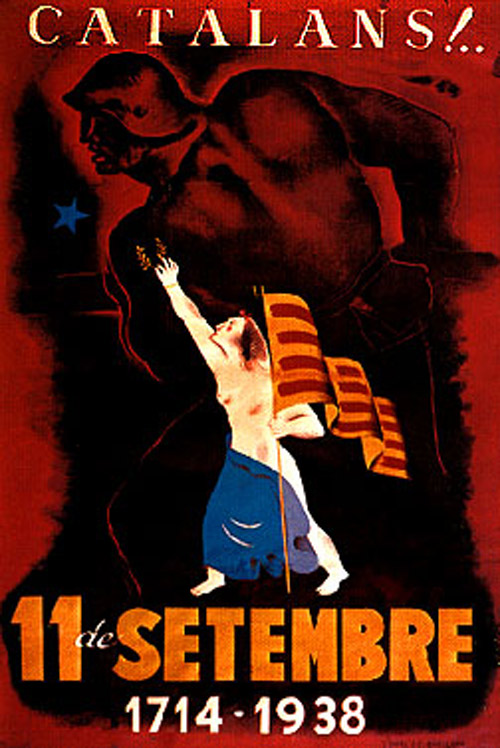 The 11th of September is National Day of Catalonia, marking the 1714 Siege of Barcelona. This poster from 1938 urges Catalans to continue to fight for their freedom, with the female figure in the centre embodying the concept of liberty.

In 1939 Franco’s Nationalist forces emerged victorious and the Spanish Civil War came to an end. The creative elements that had produced many of the most memorable propaganda posters were brutally repressed, but the experiences of the war, and the powerful imagery that remained, would continue to have a profound effect throughout history.
← PREVIOUS
10 Cutting Edge Folded Paper Artists 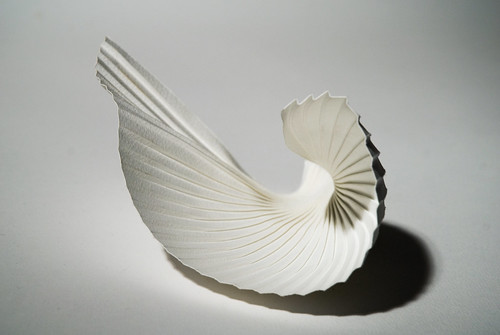 NEXT →
15 of the Most Iconic Newspaper Headlines Ever Printed